So I caught up with Bobby Wheelchair from WheelchairX4 for an interview that coincided with their ripping track from the Halloween Podcast. So here's what the man himself had to tell me about the band's experiences and influences.

Any major influences into what you play?

We both like different kinds of extreme music and other genres as well. We both had a background playing classical music in our teens, oddly enough (Stuart on trombone, Bobby on piano). My drumming is pretty basic and repetitive - in my old age I like crust and lo-fi grind, but when I was younger I liked Death Metal more than anything. If I had all the time in the world I'd learn more techniques but I usually play what's necessary. I could barely play drums at all when we started Wheelchair: I'd just play as fast as possible. But to me that's a good punk approach, don't wait around until you can blast at 200 bpm with a metronome: do what you can, now. 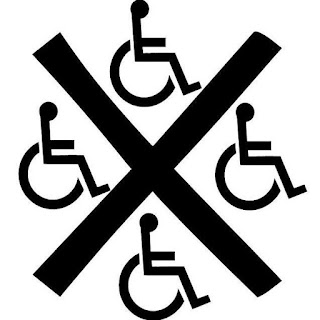 Have you any interesting memories of Monsters of Rot?

Plenty. I wrote a very short album about the experience. http://bobbyking.bandcamp.com/album/green-island


I must ask Bobby, does getting naked at the gigs help your drumming at all?

I try to rise to the occasion. The night before we'd done the drummer swap, so I felt I should push the boat out for the festival. I saw the curtain behind us and something went click. The best experience you get can playing live is leaving people speechless. That happened to me once when I saw the Dwarves, and a girl jumped on stage during the last song and started sucking Blag's dick. Me taking my clothes off is pretty tame compared to that.


Can we expect any new releases in the next while?

There wasn't much when we started, and we can't take much credit for it expanding; but the main grind band are Sufferinfuck, who have about a dozen offshoot band thanks to the drummer, Matty; including Deathwank and Major Cunt. Apart from that there are decent hardcore and metal bands like Clocked Out and Buried Sleeper; and Co-Exist, who've been around for longer.


I seen you guys played Chimpyfest this year, what was your experience like?

Brilliant, we don't actually play that often; so going from Monsters of Rot last year to Chimpyfest this year was magical. I got completely plastered and stagedived all night. All the bands were great; by now we've got a few friends in London who were there so it was great catching up. All part of the big crustgrind family. I then tried to walk back 8 miles to where I was staying. I walked two hours, sobered up, and still spent £20 on a taxi. I had an oystercard on me and everything. 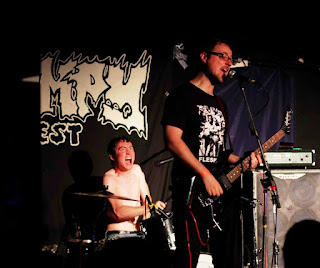 Any thoughts about the referendum and how it turned out?

I was pretty obsessed. It was very exciting. Nearly the whole media was against it, as well as big business and the banks. The No campaign won by lying to old ladies that their pension would end. They had almost no activists: they relied on media bias and the fact they had money from the Tories to run call centres in England, and bus up paid campaigners from England. For these reasons, the under-55s in Scotland voted Yes. I believe it's just a matter of time before we get another shot. (Stuart, although pro-independence, doesn't necessarily agree with this analysis) It's a comparable situation in Ireland, people there are sick of the corruption in civic life and want to take some power back; independence is just the best solution for Scotland.


Lastly, any plans to hop back over the water and play Ireland again?

Love to, last year was one of the best touring experiences we've had. Someone book us.

-JP
Posted by Chainbreaker Records at 15:43