Hey guys! Could you introduce yourself and what you do in the band? 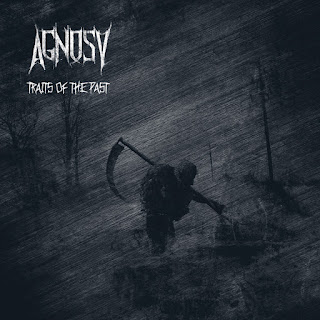 You appeared with fully-formed, well-written, deadly crust LP seemingly out of nowhere with 'Point Of No Return' in 2011, were you playing a lot before that as Agnosy? Did you play together in other projects?

CHRIS: Mark, Rob and myself had been playing in a band called Beginning of the End for a few years before Agnosy. I've played in bands with Rob for 10 years now, we were in Give up all hope together before BOTE. Beginning of the End crumbled quite quickly, we decided to start with a clean slate. Rob came up with some great songs (I came up with a few shit ones) and we soon asked Alex to sing.

ALEX: well, i think we played together for around a year or so before we thought we had the songs nailed enough. once we were confident enough to think about recording them. However, the other guys played in beginning of the end before agnosy and rob and chris also played in give up all hope together previously so those guys were pretty gelled playing as a unit.

So let's talk about the new release! (Put out by Active Rebellion, Scream Records, and Neanderthal Stench Records.) First off, the cover art is superb. Who did it?

CHRIS: Rob did all the art, it's useful having a graphic designer in the band.

ALEX: Cheers. I think its really good too, again Rob working his magic on the paint app of his computer.
agnosy.jpg


The production on 'Traits Of The Past', as with the first album, is amazing. Really. It's very rare to get a crust records that has this quality of production but with the right amount of aggression, as I find generally a cleaner production can take away from the roughness and rawness associated with crust, and in the process make it less powerful. However, with both your records that is evidently not the case. Was this something you intentionally aimed for?

CHRIS: Yes we're pretty happy with the sound. We had a bit more time to record than on the first LP so spent time getting the drums and guitars sounding as good as possible before recording them. I think it's good to try to get some kind of live energy into the recording. There are a lot of 'raw' hardcore punk bands around at the moment but it's important to be heavy too in my opinion. I just hope that when we do the next one it won't be 35 degrees in the studio.

ALEX: Tough question. Well with the second album, which was recorded by Dempsy from fine city audio, we decided to take alot more time with i.e a whole day just setting up the drums. We probably spent around the same time mixing it as the first album, because we spent our time setting up. We should have done that with the first album but hey ho. I dont think this is something that we initially aim for.

CHRIS: I think part of the problem with the Past the point of no return is that we had tuned down to B. We had to get used to playing in a dropped tuning, recording it was something we needed to learn as well. Rob's guitar sounded really good straight away, but I ended up re-recording my bass as I really wasn't happy with the sound. It was a much smoother process with Traits of the past luckily. 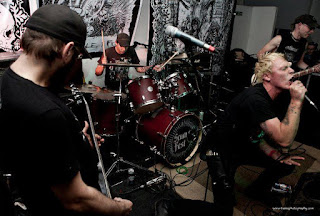 Stylistically, you have remained consistent over the two releases, perhaps with some mellower segments in 'Traits Of The Past'. Personally, I think it's awesome, as if it's not broke, don't fucking fix it. What was the direction for you when writing the new songs?

CHRIS: I don't know about mellow bits, there is one on the first song I guess There is a bit more riffage going on and the songs are more rounded.

ALEX: True if its not broken dont fix it lets see what the next album sounds like!!

Again, Agnosy has a very defined sound, which while it is undeniably rooted in crust and d-beat, has a definite metal feel underpinning it. Would you agree? What are your influences in creating this sound?

CHRIS: Well Rob and I listen to a lot of metal. Some bands I would include as influences are, Black sabbath, Sacrilege, Bolt thrower, Anti-cimex, Amebix, From Ashes Rise, Tragedy, Wolfbrigade.

ALEX: I dont think we try to make a sound we just know our sound and we just play so its quite difficult to give you a proper answer for that.

Interpretations of something can vary massively between individuals, in your own words, what does 'Traits Of The Past' as a concept mean to you?

ALEX: Well we couldn't find a name that we called all agree on so we just picked a track from the album and used that.

Tell me an inane fact about each of you!

CHRIS: Mick Hucknall's is Alex's dad. Mark doesn't have a beard, although I've not seen him for 3 months so he could have one now. Rob has a beard. It's true that I'm 144 years old which is lucky as it takes me so long to answer interviews.

ALEX: Chris is actually 144 years old. Rob is from Poland. Mark is so into techno that when he does a shit techno beats come out and I am a carpenter like jesus.

You have toured Europe a good bit, any plans to return soon? What about America?

CHRIS: Would be up for going anywhere as I love playing gigs, especially with this band. We did start looking into America a few years ago but it got a bit disorganised, we need a manager. Would love to go there though.

What newer bands around at the moment have you been listening to?

ALEX: Napalm Raid kick ass not totally new but yeah infernoh are real good too London bands are split veins and organized death machine. Oh and there is also this real kick ass band called gift of death that are about to release a demo.

CHRIS: Dunno I always end up listening to the same old bands. Dark horse from Australia, Skemat. Black Code are great but not that new anymore. Swordwielder were really good when I saw them.

Thanks so much for the interview! Any upcoming gigs/final words?

ALEX: No gigs booked at the moment. Final words urrr dont do drugs if you have to work the next day its not fun!!!

CHRIS: Thanks for the interview and sorry for taking so long. We have health issues in the band so no gigs for a while I think.

You can buy 'Traits Of The Past' from Chainbreaker here.

-CMC
Posted by Chainbreaker Records at 12:12