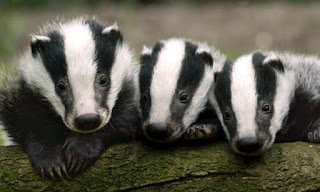 Back in December 2011 Defra (the Department for Environment, Food and Rural Affairs) announced that culling of badgers would be allowed in order to stop the spread of tuberculosis in cattle “as part of a science-led and carefully managed policy of badger control”, which then led to the first culling license on the 17th of September 2012 in West Gloucestershire, and a second license on the 4th of October on the same year in West Somerset. This all lead to said cull being executed in the summer of last year, apparently with a panel to oversee and make sure it's “humane”; but what's humane about culling a species? According to their report, which you can find on the Defra web page, the estimated population for the counties were: West Gloucestershire – 2657 to 4079 and West Somerset – 1972 to 2973 “with an 80% confidence.”  The BBC reported that, "The cull aimed to kill at least 70% of badgers across areas about the size of the Isle of Wight in each zone."


The reason behind writing this other than the fact that such a perverse thing happened is that it's planned to go ahead yet again and for the second time this year and again without an independent monitor. Each scientist consulted in the report etc. has all been government backed and rightly so, folks don't trust the government that much. They failed to reach their target of 70% last year (West Gloucestershire: 39% - West Somerset: 48%) due to a lot of resistance through peaceful protests and not so peaceful protests i.e. people smashing the traps, letting the badgers in cages loose etc.  One bright note is that The Badger Trust has won the right to challenge the legality of the cull due to lack of said independent monitoring.

The main question is, is this really necessary or just a cheap dirty solution like a lot of other policies that take the more damaging way out? To find out I did a little research into the alternative ways to tackle TB in cattle.

So the first thing I came across while reading into it was from the Wildlife Trust, in which they state that the government funded scientific research had shown that badger culling would be counterproductive unless following a strict criteria and that it would lead up to a possible 12 – 16% reduction in TB in cattle. Is 16% really worth ending the lives on a large number of sentient beings? I mean would it not be better to first tackle where the other 84% is coming from?  An interesting info-graphic on how it could be very counterproductive is shown below:

As for the alternative means to this, two obvious solutions were the first to be found, these are to set up badger vaccination programmes (as there is a vaccine that works on badgers) and to develop a TB vaccine for cattle (why doesn't this already exist?). One other point which I think is the main one would be to increase biosecurity which is pursuing and preventing all ways possible on-farm transmission could happen.  The reason I say this is that the ISG (Independent Scientfic Group, which is the research team that the government had undertaken the study) concluded with:

"Firstly, while badgers are clearly a source of cattle TB, careful evaluation of our own and others’ data indicates that badger culling can make no meaningful contribution to cattle TB control in Britain.
Indeed, some policies under consideration are likely to make matters worse rather than better.

Secondly, weaknesses in cattle testing regimes mean that cattle themselves contribute significantly to the persistence and spread of disease in all areas where TB occurs, and in some parts of Britain are likely to be the main source of infection. Scientific findings indicate that the rising incidence of disease can be reversed and geographical spread contained, by the rigid application of cattle-based control measures alone."


So their own team over a trail that lasted around eight years and cost a serious amount of money showed that there can only be harm caused through the culling of badgers. THE GOVERNMENT'S OWN TEAM. It's pretty obvious what's needed is what is stated in that “rigid application of cattle-based control measures”  are needed to be implemented and not the culling of an innocent species, the only reason I can think of personally is that the government is too lazy to go through with putting in these regulations and making sure they're implemented.  Maybe it'll cost them too much so they'd rather gun badgers down to keep farmers quiet.


Whatever the real reason, this isn't the way forward so UK residents who see this should write a letter to the PM, to your MP, whoever and raise awareness of this shocking development.

-JP
Posted by Chainbreaker Records at 14:58