Which member of the band am I talking to?

You are talking to Riley. I'm the guy who holds a microphone and fails to use his voice properly at loud volumes. 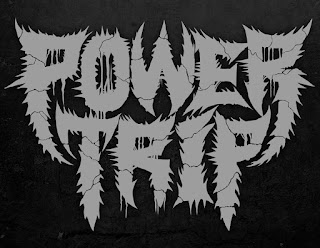 So you played the European tour, it looked pretty mad. Did you enjoy it? What are your highlights? Do you have any crazy stories from the tour?

We had a pretty damned good time in Europe. Full disclosure: some of the shows were huge busts. Definitely a few shows where a dozen or less people came out. We didn't care, and neither did BANE, but I guess I was kind of surprised because we expected more out of it. I didn't expect some of the smallest shows we've ever played to be in Europe, especially going out there with such a killer band like BANE. However, when bad shows happen, we just had more incentive to make our own fun and have a good time. My highlights were basically anywhere that wasn't Germany. Just kidding. Maybe. I had an absolute blast in Munich, Hamburg, and Berlin.

One of my favourite stories from tour involved the police. We were crossing a border, I think between Austria and Hungary, and Arthur (guitarist/6th member of PT, shredder with War Hungry/Cold World/Terrorism) had some weed on him. We hadn't smoked in a few days and were getting cranky from sobriety, when finally some kid came through the night before. So anyway, Arthur has this weed on him and right after we cross this border, Austrian police come roaring after us. They pull us over on the side of the road and start demanding all sorts of shit in broken English, yelling at our driver, typical scary shit when you're dealing with cops in a foreign country. Nobody knew what to expect. They've even got two big ass German Shepherds there to search our van. They're threatening to arrest us, deport us, etc. Then they tell us something along the lines of "we know you have it just give us the weed and we'll let you go". That's the #1 lie any cop will tell you. Instant cuffs if you give it up. So we let them search the vehicle. At some point when they weren't looking, Arthur has a brilliant idea and whips out a McDonalds "pocket burger". IF you can't tell what a PB is by context clues, it's a cheeseburger that you put in your pocket for a sweet delicious surprise snack later. Pocket Burger. Live it. Arthur takes the burger, and sandwiches all the weed we have into the burger and starts eating it. We're standing outside the van, cops are yelling at us, dogs are barking, they're desperately trying to find anything to pin on us or extort us with... and here Arthur is, scarfing down a cheeseburger with extra "lettuce" in front of these cops and they are completely clueless. Arthur chokes down the burger, they let us go, and everyone is in shock because they can't believe we got away with it. Morale of the story: Pocket burgers save lives and that's why I always have one handy.

The American scene seems to be much more into the suicide moshing thing and getting up in your grill, how do you find that as frontman? And why do you think it's not so prevalent in Europe?

From what I saw, I don't think it's that different. I don't intend to pigeonhole anybody, but everywhere I go you see general archetypes of people who go to hardcore shows. You have kids who genuinely set it off/mosh hard in whatever manner they like because they like the band or like releasing that aggression in a better environment than the streets. Some people just enjoy being present at the show but don't really participate. Then you have the person whose mentality is to be an attention grabber. Those are the people who attack the crowd, stage dive at inappropriate times, get all "up in my grill". It's cool, I get it. You want to be a part of something, but you don't have a band or whatever, so you go off extra hard so maybe you'll be noticed or when you look back at the YouTube of the show you can point yourself out and say "That's me! I was there!” That doesn't bother me. There's very little "show behaviour" that irks me, unless a person's actions are clearly making people upset or uncomfortable. There's no such thing as a truly "safe space", but in hardcore, at least we typically have more control over it. 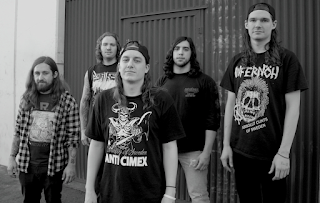 How has the Manifest Decimation release gone generally? Where did you record it?

The reviews and feedback I've seen have been generally positive. We had the third press out in less than a year since the album release, and people tell me that's impressive. I'm proud of the record. We didn't half-ass anything about it. The recording process was split between Philadelphia with Arthur Rizk in his house, and Daniel Schmuck in Texas.

What are you favourite bands at the moment in USA, and separately worldwide? 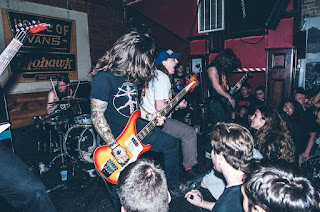 What's happening at the moment with you guys? Any plans on touring or a new release? Are there any big gigs coming up for Power Trip?

I am trying to sell all my excess shit right now because we leave in a week for a west coast tour with EYEHATEGOD and Iron Reagan, which will be a wonderfully fucked up time. We're slowly starting to craft riffs and songs for a new LP for 2015.


Is there much of a scene in Texas? What’s your favourite live show?

Texas is the greatest scene in the world. My favourite live show outside of our own (I love playing, I love my band) is probably MIDNIGHT. They are just the absolute sickest in the game.

Thanks for being patient!

You can buy Power Trip's latest LP here from Chainbreaker.


-CMC
Posted by Chainbreaker Records at 08:50