I caught up with a friend of mine to discuss the ins and outs, and ups and downs of dumpster diving!


So can you explain to people what is dumpster diving and why do people do it?

Dumpsterdiving is basically taking “trash” out of a dumpster to use it. Stores throw away tons of useable materials, about everything you can find in a store (if you’re lucky!), depending on the store obviously. Most common is food. Food-products have expiring-dates, which doesn’t say much about the state of the food itself but is merely a guidance. Anything that is ‘expired’ will end up in the dumpster (there are a few stores who donate it to foodbanks or sell it for cheaper prices or whatever though) so yeah you can guess that you can find almost anything. This isn’t it though – anything that got damaged will end up in there as well as it’s no longer fit to sell. So depending on the store you can find all sorts of things, from food and drinks at the supermarket, to carpets, vacuum cleaners and all sorts of furniture at the IKEA.... Expired or damaged doesn’t mean unfit to eat/drink/use though – some common sense is good enough most of the times to tell if something really is bad or not.

I think people dumpsterdive for a variety of reasons.... because they’re hungry, homeless, wanting to save money, money-less, as a statement, a general “why the fuck not”-feeling.... Difficult to put it into categories. 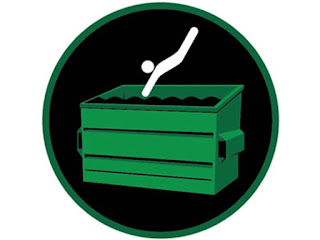 There are a lot of ideas about it being dirty etc obviously because it's food from a bin haha. Do you find this to be the case?

Nothing that can’t be washed off! Well almost nothing, as some stores put bleach over all the food in their bins which poisons it (capitalism really is a wonderful thing ain’t it?). It is dirty from time to time and especially in the summer it sometimes smells like hell but well yeah if it’s worth it.... Had it a few times that someone took a dump in the dumpster (hehe) – that ain’t worth it for me I must admit, dumpsterdiving was over for that night once I found it haha. But mostly it isn’t that dirty at all on the top (the bottom of the container is worse). And when you wash it I can’t see why it would be ‘dirty’.... The dumpster I go to the most at the moment is a compost-bin of a bioshop in the neighbourhood, which always has a few vegetables that aren’t good to sell anymore, but since they prepare fresh salads etc. there are always leftovers – little pieces of peppers, courgettes, and so on, that I take home – perfect for a dinner for two. Nothing dirty about it since I get home and wash em all off immediately.

What is the legality of dumpster diving?

Not sure what the legal side of it is in other countries, but in Belgium it ‘s legally considered as theft, and if the dumpster is behind a fence or whatever it’s considered as trespassing. There were multiple people in Belgium convicted because of it in the past (yeah capitalism realllyyyy is a wonderful thing).

Would you recommend it to people? If so, why?

Looking at all the stuff I got out of dumpsters I can’t do anything else but recommend it. Not only because of that but also because it got me in closer relation to my food in some way, as you have to double-check everything if it’s still good to eat. Looking at how this system is organized I can do nothing but recommend it (even though I recommend self sustainable gardening even more!) as it’s disgusting how much gets thrown away.

What are the upsides and pitfalls of it?

Upsides : lots and lots of free stuff. Always an exciting trip as you never know what you’ll find. Pitfalls : sometimes it really is dirty, smelly, sometimes you cycle through the cold to find nothing at all in the dumpster.

Go in at night, bring a good headtorch, don’t be afraid to get your hands dirty (or bring gloves), be cautious as you might be breaking the law. I usually regret that I was wearing my good jacket after dumpsterdiving as I never think about it in advance but it gets a bit dirty most of the times. Watch out for broken glass and other things you can really hurt yourself on. In the beginning I must admit I too had to shift from “expired? Nope not good anymore” to “Dates on the package don’t mean shit”. Smell it, touch it, taste it. Be careful and don’t eat rotten meat or something... With fruits and veggies it’s not too difficult but still. Like I said : some common sense does the trick most of the times. Find the dumpsters in your neighbourhood (more people do it in cities, smaller villages often don’t have a lot of dumpster-divers...) and make sure you visit them on different days (at least in the beginning) to keep track when they empty it and when you’re more likely to find a lot!

Rules to live by are : if you’re not going to use/eat/drink it, don’t take it (how stupid is it to take things from one dumpster only to put it in another one a few days later? Rather leave it for someone else!). Except if you plan on distributing it to people who can use it. Always leave the place cleaner than you found it! Don’t make a mess as that will mean locked up dumpsters, bleach or anything similar soon, which is terrible for people going there who need it more than you do. I’ve seen dumpsters where idiots drew “free food”, hearts and other shitty hippy symbols on the containers – not a good idea. The best place to dumpster-dive in the previous city I lived in started locking their dumpsters after they had to clean up in the morning because people threw it all around. Don’t really steal anything at the same time (anything in the surrounding area of the dumpster). No problems whatsoever with stealing from major corporations, but if you do they’ll secure the place after a few times and you (and others!!) won’t be able to get anything out of the dumpster anymore.

Are there some places better than others?

And at certain times of the week/month/year be better for certain things?

What was the biggest haul you ever got?

The best one definitely was a week or two ago when the freezer broke down of a bioshop nearby (I assume that was it as it was a LOT and it wasn’t expired or anything...) – resulting in almost 20 packs of tofu, 15 packages of tofu sausages, seitan, tempeh, around 20 tofu-burgers (different kinds, 2 per package so actually 40 burgers), vegan puff pastry, lots of soy yoghurt (different tastes), lots of different kinds of cheese, and a lot of fish and meat (which we give to the doggie). The food we got out of that dumpster is easily worth over 200 euros. Pretty insane! And finding wine in the dumpster is always good as well!

-CMC
Posted by Chainbreaker Records at 15:51