Hey Calvin, thanks for doing the interview. First of all, congrats on the new release, haven't stopped playing it. It's powerful, inventive, meaningful - it has a lot going for it, not to mention the artwork by Mr John Abell. Are you happy with the process of creating it and how it's turned out?

Over the moon with this one. We wrote pretty much all the songs in a year so it all felt quite fresh and energetic going into the studio. We put a lot of thought into the sequence of the songs and I feel like it flows much better than the first. It has a momentum and doesn't let up from start to finish. The production and artwork are spot on too.


With Along the Dew, it seems to recall the compact yet impactful style of the s/t EP, with some of the more intricate bass riffs and guitar rock riffs from Far From The Callous Crowd. Would you agree? Did you have a particular stylistic approach in mind when writing these songs? What bands were you listening to at the time?

Not at the outset but it became clear throughout the process that it was going to be more of a 'hardcore' record. I don't think it's too much of a departure from the first one, just maybe a bit heavier / more aggressive in places. We're listening to bands like Zeke, Death & Sick of it all. Maybe some of that crept in somewhere?! We've tried to write slower songs so many times but they always end up being rapid, so fuck it.

I really enjoyed the lyrical content and way in which they're put to the songs. Sometimes they're done in a more typical way, as in kind of written for the music, but more often than than not on this release they're like stories, or poems, put to music. Can you tell us maybe why you chose to write in this way, like was there an intention to allow for the lyrics to be considered on their own as poems?

I wrote them all to the music, even if it doesn't look that way cos of how they're constructed into sentences and paragraphs. I've tried writing 'line for line' and making the last word rhyme but it just doesn't work for me, so I tend to try and ramble and then make it fit the rhythm. Each one takes fucking ages, believe it or not!


Do you have particular favourite parts of the album?

The sample at the end of Chalk & Flint is a resistance song from the Spanish Civil war. The guitar reaches a top note and then Luciano Ponzetto kicks in immediately like a boot to the stomach. I thought that was pretty cool.


You have a sweet UK tour lined up - how did the release show go? Any other tour plans further afield?

Tour was great; the best one we've ever done for sure. Every gig was energetic and we really got to showcase the new material and get the record out there. We're hoping to visit the mainland in September and another UK tour in October.

I actually wasn't talking to you much about the USA tour with Conflict - how was it? How did it compare to Europe as a scene, and the reception at the shows themselves? Don't even know if I should ask but sure fuck it - what was the weirdest shit that happened on the tour?

It was class mate. Fucking hot as hell too; Texas in July is no Joke. Obviously nobody had a clue who we were over there too so it was interesting playing to completely new crowds and watching some amazing bands along the way. The oddest thing was the palaver we caused in San Antonio where the metal band downstairs were carrying a real goats head on stage. We took exception and it all got a bit messy. I'll leave it there... We ate at Denny's A LOT.


So what does Llygaid Gwyrdd mean, and what's the song about for us non-Welsh speakers?!

Green Eyes. It's just an abstract song about the grass being greener on the other side, then arriving and it's not. Making the same mistakes over and over again kinda thing. 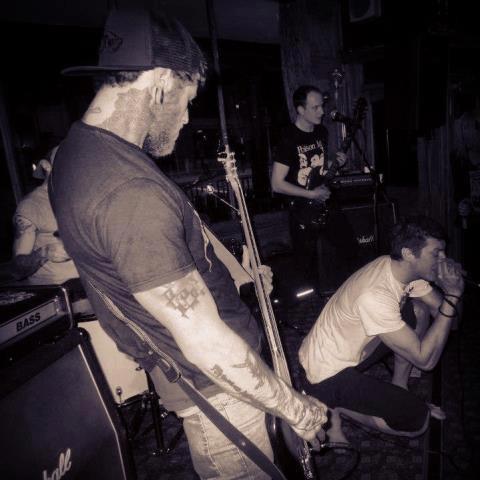 If you had to go away for 3 years, off the grid, relatively isolated from society - where would each of you go?

You're on tour in Asia in the middle of fucking nowhere. The van breaks down. It'll take hours to get fixed. What do you do?


Thanks so much for the interview, really appreaciated. Safe!


-CMC
Posted by Chainbreaker Records at 02:28