So, I was over in Barcelona with some friends (shout out to the Sauselona gang 2018) and as always I was on the prowl for punk shows. I eventually found one by chance, I didn’t know what it was or where it was (thank fuck for google maps - if they want to read my text messages about I’ve run out of hummus that’s fine as long as they let me use maps to navigate to gigs), but the headlining band was captioned as crust. SOLD. Cans of Mahou for 1 euro (I think it was actually a suggested donation) and the guy behind the bar was wearing a 1916 t-shirt. That’s when you know you’re in the right spot, and are staying there for the rest of the night. And that’s when I first heard Knür. Pure fucking catchy neocrust, smart enough to keep things interesting, and executed amazingly well live.

What was the name of that squat? I have no fucking idea haha, but I remember how awesome it was, and there was some kind of punk shop next door to it?

The gig we met it was in Blokes Fantasma, an historic squat really close to Kasa la Muntanya, the oldest squat in Catalunya. The punk shop next to the gig it's the distro they got in there where you can find albums, t shirts and anarchism and libertarian books.

We took cuz it sounds good but it comes from old Scandinavian language that meant the knots of the trees... it wasn't exactly Knür. And it means pig in Polish - we learned it later haha.

You’re from Molins de Rei - what’s the scene like there? And how did you all meet?

Yes we are all from Molins. Having in mind that Molins it's a town (even if here live about 26000 people) we can say that we have a strong social network in between the young people and a lot of implicated people in social movements (not only punks or anarchists) . It makes so easy to meet with friends and play. In our particular case,  we are friends since childhood, so it's been even easier for us to compose together and make the band.


Let’s talk about ‘Sapere Aude’. I think you guys have had a consistently good sound, but did you approach the writing and recording of the new album any differently? Where did you record? You recently had a line-up change right? How did that go? How has it changed the band?

This album is special for us because it's the first one we recorded ourselves in our rehearsal room. We did the mixing and mastering with Xavi from EM Estudi. We are so excited about the final sound and we are waiting for the final release in vinyl. About composing, like I told you before it's been easy for us to write songs and play together because we are close friends and we know each other pretty well and most importantly, we love music. 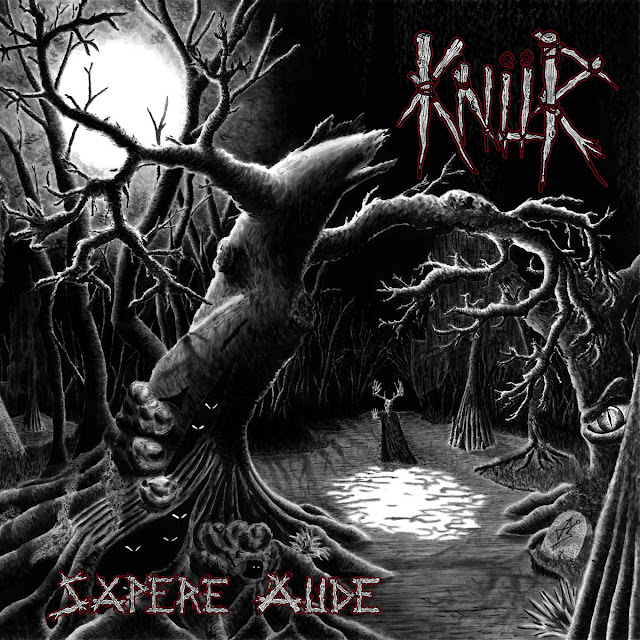 This last album it's also special because is the last one with Sergi, one of our guitarists. He has left the band: Smint, our drummer until now, it's going to play the guitar with Guim. It's been a tough year because of that. Having the album all recorded but not being able to present it in live. We have been playing gigs again the lasts months thanks to Lluís, another friend of us from our town that plays drums really well (even he never played crust before). However, the idea is that Pau, another childhood friend from Molins is going to be the new Knür's drummer.


What gear do you guys play with live? Do you use anything different when recording?

We use almost the same gear in live shows than in recordings. The only change is that we recorded with the drum kit of a friend that let us play with his (because it's a better drum kit).
The rest of it it's exactly the same. (Orange Dual terror and Peavey 5150 guitar amps with 2x12 orange cabinet and a 4x12 Peavey cabinet; An Ampeg amp for the bass with an Orange 4x12 cabinet). The guitar clean parts of the Sapere Aude Album are all recorded with the Orange Dual Terror because we preferred the sound.


I wanted to ask you a question on tour plans - but maybe it’s a sensitive topic right now given all of the shit that’s going on in the world right now and the uncertainty that surrounds everything. So maybe, a better question would be where would you most like to tour?

As you know, we had in mind to go to Euskadi for 3 shows and then come to Ireland to play 3 more shows. However, we had to cancelled it because of the pandemic...
We have in mind still to come to Ireland and maybe make a 2-3 weeks tour in August around Germany, France, Denmark, Holland, Poland, Czech Republic and Switzerland to present "officially" the Sapere Aude album. But it's soon to tell...We are all working in different shitty jobs and it's so hard to manage to find free days to travel together.


What was your first show? Where have you played, and what was the best food you had on tour?

Our first show was exactly 1 year after creating the band. It was in September of 2015 in Kasablanka, another squat in Molins that it's been squatted since 1996. It was during the local celebrations in our town.
In most of the places we played, there's been a really nice vegan food and it's hard to chose and remember all of them. But if we have to chose one, we would stand out the amazing dinner we had in Lübeck during the summer tour in 2018: stuffed peppers with vegetables, all spiced perfectly, and cooked in the oven. Delicious!


Do you only sing in Catalan? Of course I respect your choice to sing in Catalan, and in my opinion I love the sound and feel of the language (also, fuck everything being in English all the time) - but I guess I would like to hear your thoughts on why you choose to write in Catalan and why is it so important to you?

Yes we do sing in Catalan. We also sing in Spanish but just a little part in the last song of the first album (La extinción del Humano), another little part in the 2th (La última de las Tempestades) and 1 entire song about the Zapatists in the Sapere Aude album that the lyrics are from Eduardo Galeano  that wrote in Spanish (Príncipes Condenados a la Servidumbre).
It's an interesting question for us "why is it so important for us to sing in catalan"; We will try to explain it in a few words:
We were all born in Catalunya, that maybe some of you will know that nowadays it belongs to Spain. But if you search a little bit about our history you will see that it isn't always that way... There's been a persecution of Catalan Culture since we lost the 1714 war against the fucking Borbons family (Felipe V was the king in that moment). This persecution it's been more notorious during the dictatorship of Franco when we lost the Civil War that started in Spain in 1936. All anarchist ideas that were all at its fullest splendor before starting the war were totally destroyed.  Two days after the fucking fascist, Franco, died peacefully in his bed in 1975 the king Juan Carlos de Borbón (descendent of Felip V and father of the current king of Spain, Felipe VI)  supposedly assumed the control of Spain. Since that moment the people were told that Spain was, and still is, some kind of Parliamentary Monarchy. Our mothers and fathers grew up thinking that after the Civil War anything would be better; and it was their mistake...After 40 years of dictatorship, Spain wasn't in the line to compete against France, Germany and all the others "big" countries of Europe. The modernization and the progress in the last years it's been mental, times have changed a lot and Fascism changed its clothes too. But the problem nowadays is even bigger because of Capitalism and this Economic Dictatorship that reigns in almost every country in the world...
But going back again to your question, you would probably ask yourselves why an anarchist band worries about countries division or some shit like that...nothing further than reality:
The thing is that we are against any kind of Fascism or any form it takes. The reality here in Spain nowadays is that we still have Franquist Governors but now they wear fancy tie suits. We have got more political corruption than in any other European country in fuckin EU and social injustice and misery are spreading, like in the rest of the world, fastly. We do not believe in some kind of Catalan State or something like that, we just want to express freely in all the languages and different cultures that we have here from all over the world. In fact, you probably know that it were a Referendum here in Catalunya, like it happened in Scotland, about being an Independent Country. Most of the people voted to do not belong anymore to fucking Spain. The Central Spanish State ilegalize the votation and after that the persecution against Catalan Culture or simply people who disagree against power has reached like in times of dictatorship (people in prison just to write some words against spanish fascist state in social networks, musicians and artists persecution and in short, all people that stand up against fascism). We are against this racist, xenophobic and fascist Spanish State that still persecutes all the ideas that are different from his. A lot of people is waking up against social injustice and corruption. We see in Independence, an opportunity to change the paradigm, to try new ideas, to debate, to build ourselves a fair country, and to be, why not?!, the catalyst for the liberation of the rest of zones in Spain (like Euskadi, Asturias...). We feel catalan because it's our roots the same way Bakunin felt Russian, not in terms of National Identity.  We do not give a fuck if people wants to feel Spanish, Catalan or Irish. We do care about the people that are tired of misery and poverty, sick of Europe Union fascist ideas and the global Capitalism that USA forced to the rest of the world.
Just to end, notice that we are bilingual, we speak perfectly spanish and catalan.
But we sing in Catalan because it's our language, the one that we speak every day of our life.

Posted by Chainbreaker Records at 09:11