Let’s talk about the last release, ‘Edge of the Wild’. It definitely feels like you have perfected your art, the writing and execution is awesome and tempo changes like in ‘Life Lost’ are rocking. Did you approach the writing of this album differently? Has the focus of the lyrics or style as a band changed a lot?

Hi there!  The last album feels more mature than previous things we’ve  released, I think we just have improved at skills as the whole track list of the album has been played tons of times at gigs, tours, and so on so it was pretty clear how to cope with the stuff we had when came to the studio, just with a few adjustments during the record sessions and stuff. This one differs a bit musically from the previous albums, it came out way heavier, way more “concrete” or something like that. Lyrically it feels pretty same to me, I did most of the lyrics this time, so it’s more about some  personal view on things plus some own life-experience depicted. 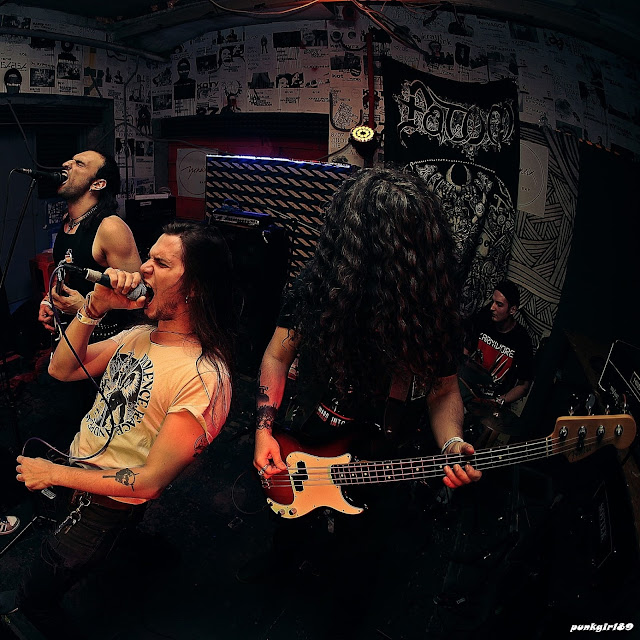 What is the scene like in Moscow for crust/stenchcore?

The local scene represents a various number of bands playing in any sorts of possible sub-genres and stuff. There are some stenchcore bands here as well, mostly from other towns of the  European part of Russia and all are our good homies - Repression Attack, Step to Freedom, Karzer, there are some from the ex-soviet Republics like Pomrachenie of Minsk and even something from Kazakhstan, I’ve heard lately .However in spite of the matters of distance between towns and shit  if there are any intercity events to occur all these bands do play together at some of the craziest gigs ever haha!


You guys have played Europe extensively - where are the top 3 places you would like to tour?

Europe is extremely good when tour with a band, there are so many amazing venues kept awesome in really professional way. Most of them rule! Personally most memorable ones are Shrottbar in Switzerland, Zoro in Lepzig, and Kopi for sure! Plus many more, the list might be endless..  Always Looking forward to visit more places and countries we’ve never been to. We highly appreciate such moments.

Favourite show you ever played and why?

A hard sort of question haha, can’t remember most of shows due to different circumstances, there were some memorable ones I guess, the gig in Tokyo with Life, and Coffins during the Japanese tour with ZAY in 2018 was a total banger, maybe the best one for me personally by this moment.


In terms of gear (guitar, bass, drums) what are you using at the moment? Has this changed a lot since you started? What did you record ‘Edge of the Wild’ with?

Haha oh man, It has changed a lot since the start of the band – I believe we had the shittiest gear ever, cheap guitars and pedals and all sort of that, sounding like shrieking noisy piece of crap. We changed lost of equipment, I guess we’ve hardly ever used the very same set of everything on each record, changing or borrowing them every time. For the last years we have played mostly Ibanez stuff if talking about guitars and shit –For now I use an Ibanez “destroyer” guitar circa 1985 with an adjusted Dimarzio” super distortion” pick up instead of the original one, for an amp I use my Sovtek MIG100, the most fierce amp I have ever tried,  so respectively used this stuff for the “Edge of the Wild” as well.  The bass player, Roman, used an Ibanez bass as well, some sort of superstrat basses of the kind.


Every band has one of those crazy fucking stories - what’s yours? It better be juicy!

I consider that the amount of “funny stories” is overwhelming us from time to time haha!  Wasted state of mind always bears the craziest situations ever possible, it could have been written a compilation-book including best of them…. Fine, I dunno if it was funny or witty enough to pay $1000 charge bill after showing a dick to a copper and walking naked around Tokyo in the night ahahha. Different shit occurs all the time.


You hinted at big plans for 2020… what are you hoping to achieve this year as a band?

So everyone is familiar with covid-19 shit, and it’s pretty same here, everything is shut down and it’s unable to go on tours for a while, so most of the plans of that sort are postponed for an uncertain point in future. Meanwhile we have just recorded a bunch of tracks for a long-awaited split release, made some brand new ones and more that in work are to come out in a while. Stay tuned and Crust on!
Thanks for the interview mate!
Cheers from Moscow.

Posted by Chainbreaker Records at 09:09